Where I grew up, we called a dusting of snow on December 11, “a Thursday.” So I felt really stupid when I spent about 20 minutes of my life looking at pictures of snow in New Orleans, when I grew up in a town where the average snowfall in one year is 95 inches.

But I had a conversation with a Baton Rouge native, now in Tulsa, who is devastated he missed this…

Eric: I still can’t believe its snowing in Louisiana and i am missing it! I move up north and it snows in South La! Whats it like?
Kev: It was snow early (like til 9:30), then uptown turned to sleet.
Eric: is everything covered? I’ve seen some pics on NOLA.com and The BR Advocate website
Kev: no, not at all. its a dusting.
Eric: I can’t really picture it for real. I have no idea what it looks like. other than pictures, but I’ve seen those before. I really cannot imagine what snow looks like in person. I’m not even joking.
Kev: Wait, you haven’t see it ever?
Eric: From what I hear, it hasn’t snowed like that in 20 years. I remember the 1988 snow, but I was three.
We had slushy snow in 1993.
It snowed on New Year’s night in 2002 in Baton Rouge, but I was in NO for the Sugar Bowl.
I’ve just chronicled all the snow I’ve seen in my life.
Kev: I’ve seen snow like this in MAY.

So the historical context of this snowfall I suppose DOES deserve the absurdity of the day (which feels remarkably like the last day of school before Christmas break. No one is doing much of anything. We’re all taking pictures, blogging, chatting about the snow… making snowmen, going on the roof to throw snowballs at people below, etc. Some of the equipment guys threw together a football game on the practice field).

Here’s some alleged facts (send by my mom, via Weather Channel reports). They may not be correct, as I have supplemented lack of data with potentially inaccurate details:

It has snowed in New Orleans seven times in the last 60 years.
It has only snowed one inch or more twice before today in New Orleans.

I can recall days in which my dad would carry me to the bus stop because the snow was too high for me to walk through when I was in first grade; the aforementioned snow in May; and of course, blizzards where we’d get like 2-3 inches an hour.

But down here, people know exactly how many times they’ve seen snow.  So I suppose it is truly a history event. Sorry you had to miss it, Eric.

And by the time I finished writing this, most evidence that the snow was here is completely gone.

Note the lack of actual snow in the picture. Yes, there are school closings.

I tried to prepare myself for the prospect of driving to work in the snow in New Orleans. But no mental preparation you can do can totally get you ready for the incredible experience of watching one of those big bad southerns in a massive pickup truck… cruising along at 18 mph with a look of pure terror on his face.

I did nearly crash my car this morning. Not because of the conditions (those were fine), but because I was cackling like Barney Rubble at what was coming through my radio. The networks were treating this weather calamity like it was Hurricane Snowfall. I laughed at the absurdity of it all, that the same people who have refused to let Hurricane’s wipe their city out are incapacitated by a fraction of an inch of pretty snow. 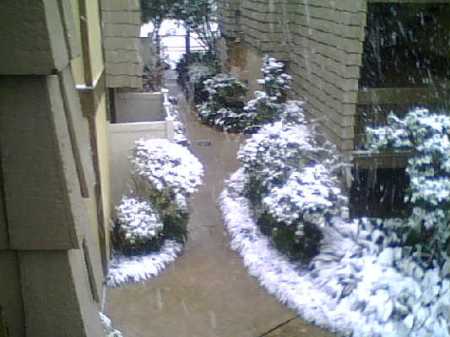 Then I started thinking of all the stuff that goes with snow and blizzards in Upstate New York. And I began to think if they were going to go to alternate side parking, if we should hit the grocery store, get some candles and firewood in case the power went out, etc, etc, as I laughed harder and harder. For crying out loud, I didn’t even need the ice scraper (I threw away four when I moved down here).

One radio guy actually said that people “shouldn’t go out on the roads unless they absolutely have to, because we can’t be certain the conditions of the roads won’t become death traps.”

That’s the line that made me almost take out the guard rail.

In 13 years of public school in upstate New York, with lake effect snow, and multiple blizzards per year, I had zero snow days. This, my friends,  is the terrifying face of Louisiana snow: 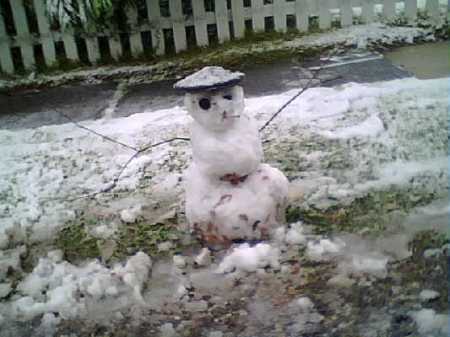 See the cigarette? This is 14-inches of bad ass snow man.

I almost ran him over parking my car.

Some of my coworkers did it right. They built a real snow man. One that wasn’t in danger of being crushed by a dwarf:

picture courtesy ColleenLeMasters.com
(Hey, my code-stealing ability > the quality of my camera phone)

The best part is, the news is still going, and they have reporters out… but it’s no longer snowing on any of them.

Overall, it’s really funny, but I’m disappointed. Probably my best chance for just my second snow day ever.  I’m sure the novelty will wear off on my evening commute when it takes me 50 minutes to get home because people won’t be able to drive in this crap.

On that note, snowballs are hitting my office window. There is no chance of work getting done today.