In my new workplace, we have an intern who works a couple hours a week. She’s a college student, young, energetic, perky.  She’s worked for us for a couple years now.

Apparently, a while back, she decided that her workspace, shared with a few other student workers, was a cluttered mess and decided to make it more suitable for her work.

The result? A vase with fake flowers, a desk organizer, with frilly note pad, and a large glass candy bowl.

At least I can raid her candy bowl

It’s always good to see a young person take initiative and ownership in something like that… But it’s weird that she has a better workspace than I do.

I need a new pencil cup. And cable run to the TV

This morning, as I left for work, I ran into a letter taped to my door. It was from the apartment leasing office.

There was nothing worthwhile of note in the letter, because it was not directed to me. It was meant for another resident, but they missed and put it on my door.

It’s a simple mistake by the leasing office, because our apartment doors lack signage large enough to easily and clearly read. As you can see from this picture. 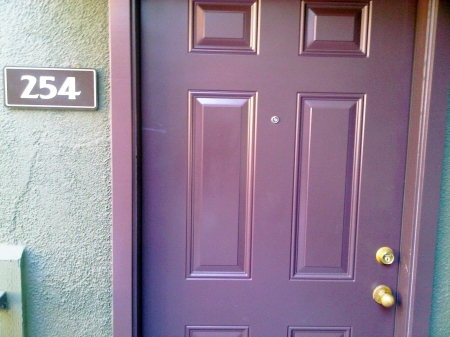 I figure that’s something I need to do quickly, so the rest of the people at my workplace don’t think of me as the new guy with the shifty eyes.

What Happened To Bravo?

When I was younger (and didn’t care about that crap) Bravo was a network dedicated to the performing arts, drama, and independent film.  Things like “Inside The Actor’s Studio” was the only thing I watched because the rest of their programming was too sophisticated for my 18-24 year old tastes.

Now, it’s West Wing reruns and a pile of trash. I’d love to see Inside The Actor’s Studio back.

Like Marge Simpson said: “Wow, Fox turned into a hardcore pornography channel so gradually, I didn’t even notice”

I always assumed it would happen, I just figured it networks like Fox would do before Bravo.

Earlier this month, I woke up and got ready for work and discovered a note taped to my door. Which was odd, because, why tape it to the door when I was inside the entire time and you could just knock and hand it to me.

It was one of those “Hey, you’re rent’s due” notes. Which was interesting considering I cut them a check a couple days earlier. I remember because, oh, it was the first and thus far only time I’d paid them.

It was also my last check. I have to order new ones with my new address on them, since those ones are about five addresses old.

I was mulling over all these things when I noticed the amount I owed them: $4.00.

The entire time I spoke with people about this place, they quoted me a monthly rent of $595. And the first time I’m hearing $599 is now. So I pillage through my stuff, and find my lease… son of a– $599. Those inflatin’ bastards.

So I wander over to the rental office, and give them my best “WTF is this weak sauce” over $4 stinking dollars. I pull a fist-full of cash out of my pocket and ask if I can just give them their $4 now, but they don’t accept cash for rent. And while a measly $4, it’s still $4 of rent.  It did give me the opportunity to say “You think I have to sell drugs to get four bucks?”

I explain the check situation and how I’d gladly pay it now if I could, but I didn’t since I was quoted the wrong price (BY THEM) and now I don’t have checks. I don’t want to get a $50 late fee for a $4 balance.

Luckily, common sense prevailed and they told me they’d take the $4 off and add it to my rent for next month.  And it was all good. Until yesterday when another note appeared on my door. Fudge.

When I go into the office, I get the same common sense as before from a different girl behind the desk. But when says “If it does give you a late fee, we’d just take it off,” I remember that she said she can’t take the $4 off now and add it later. And luckily I got a stash of old checks, because when she said that and could pay them their blood money to get them off my back with no late fees.

And now both parties have invested way too much time in four freaking dollars.

Rambling | Tagged: I have no life, Rent, stupidity |

All Texts Are Late Night Now

When I told my friends I was moving to California, the second thing they all said (after “congratulations on the job”) was something along the lines of “Don’t call or text me late” or lamenting about how now my calls/texts would be even later.

That’s because I downloaded an app for my Blackberry which will automatically change my phone’s wallpaper for me. I set it to 12 hour intervals. So at 7 p.m. PDT, (10 p.m. EDT), it changes from the traditional “Zen” background to a copy of the Zen background I modified in photoshop. Yes, this is my actual phone: 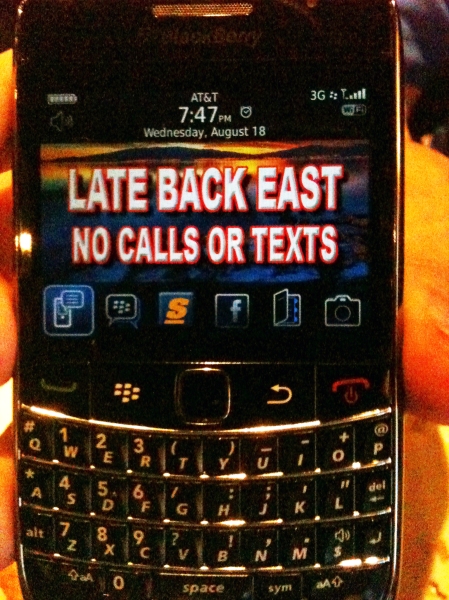 Sorry for the bad quality, this picture was taken with someone's iPhone.

So there you have it. A not-so-subtle reminder to let you sleep comfortably (No matter how freaking bored I am).

Now that I’m in California, I can’t help but notice this whole gay marriage debate. I was struck by this comment:

The National Organization for Marriage, a leading opponent of same-sex marriage, warns that if same-sex marriage comes to pass, “The law will teach your children and grandchildren that there is nothing special about mothers and fathers raising children together, and anyone who thinks otherwise is a bigot.”

Which is why we don’t have constitutional amendments to share, abolishing the hitting of people, and keeping your hands to your own side in the backseat of a car.

I’m not making some grand statement that’s controversial to people’s faiths here. This is solely a political issue. It’s an issue of our government providing its citizens with equality. You have to separate the role of government from the tenants of a specific faith (And Christianity happens to be my faith).

Our government can’t simply decide what to let or not let citizens do based on what a holy book calls a sin.

I’m a Christian. And I’m a sinner. And the same Bible which says homosexuality is a sin also says pride, hate, adultery, putting something ahead of God, working on the Sabbath, and lots of other things are a sin. And I sure don’t want my government telling me what I can and can’t do… based on my sin.

“Sorry but you watched football instead of going to Church. You and your fiancée are S.O.L.”

“You don’t get to vote or own property anymore, because you ate bacon.”

I’m pretty sure the Bible is clear on who gets to judge the sins of men and women. And it’s not us, and it’s not the government.

How is allowing your government to decide it can deny equal rights because of religious sin, any different than living under Taliban rule? Because it’s a different religion whose rules they are enforcing?

Our country is formed on freedom of religion. We’re called as Christians to spread the Good News, not legislate the Good News upon people. To paraphrase Jamie Raskin: our politicians put their hand on the Bible and swear to uphold the constitution, not the other way around.